Atheism And The Meaning Of Life. Pt. 3: Christian Existential Nihilism

on February 27, 2014
In case you missed the first two parts, here they are:
Atheism And The Meaning Of Life. Pt. 1: A Distinction
Atheism And The Meaning Of Life. Pt. 2: Motivators
I considered putting this position forward as theistic existential nihilism, but I don't know enough about other religions to make such a bold sweeping claim.So what is christian existential nihilism? Well lets start at the beginning. The video below is the inspiration for this blog series. The speaker, Timothy Keller, seems very well spoken and knowledgeable, but he makes his point so exhaustively that the first ten minutes is just about all you need to get the idea.

So what is the idea? He asks for the reason why we do anything at all. Once you frame your existence in this vast universe, vast in both space and time, what is a mere 80 years on a tiny imperceptible speck worth?Everything you do will ultimately end in destruction. The universe is running down into an ultimate heat death of nothingness. So why does what you do in your life matter at all?

He uses Sisyphus as an analogous situation to ours. From Wikipedia:

In Greek mythology Sisyphus (/ˈsɪsɪfəs/;[1] Greek: Σίσυφος, Sísyphos) was a king of Ephyra (now known as Corinth) punished for chronic deceitfulness by being compelled to roll an immense boulder up a hill, only to watch it roll back down, and to repeat this action forever.

The preview image is telling. You should be able to tell that the job of rolling a boulder up a hill all day only to watch it roll back down every night could make for an extremely frustrating life. What is it all worth? I really hope I have represented this argument honestly. We are not yet in the realm of christian nihilism, but most people will see where this is going.

If life is a mere speck of existence, but there is an infinite afterlife with infinite love and joy to follow then we have a reason to live. Our reason to live is to reach this utopian existence. There we can live in bliss forever. Does this make life meaningful? It positively does not. What it does is it makes the ultimate reason for living death. We are living only to die. There is no point in life besides dying. Life has no absolute meaning.

This is where Tim makes his error, and since he is a smart guy, it is likely intentional. The idea is that life must have a purpose, life cannot be an end in itself, it must be a means to an end. You must be a tool of some other higher meaning in order to have any meaning at all. The image on the left comes to mind. 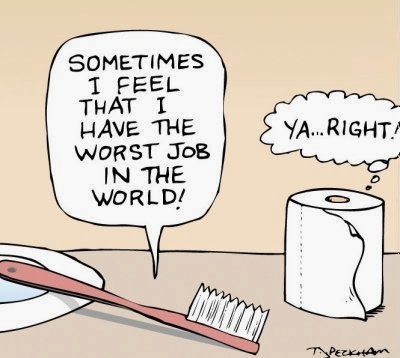 If we live our lives for ourselves then apparently our lives are meaningless. Our lives have to necessarily be an implement to be discarded. Think of which of the two roles on the left you think that fulfils.

It gets worse. After our lives are over, we will still be tools. Our meaning will then still be defined by this ultimate giver of meaning. Christians believe that their eternity will be spent in blissful worship of the One True god. In other words life must necessarily always be lived for someone else, not yourself. You live your life as toilet paper and spend eternity as a toothbrush implement for the sake of the vanity of a deity.

The logical conclusion we can draw from this argument is that to christians ice cream, movies, sleeping in on Saturday, pets, friendships, lovers, family and children all mean absolutely nothing. Nada! Zip! Bumkiss! These things are chores akin to pushing a boulder up a hill every day with no purpose or meaning whatsoever.

That's why we ask the question: why doesn't christian nihilism seem right? I mean life doesn't feel meaningless to most of us. So what's going on? Remember the motivators I spoke about in the second installment of this blog series? Well these biological motives in themselves are enough to give our lives plenty of meaningfulness. If our lives were bereft of happiness, we might feel that the boulder analogy applies to us. In fact people who suffer from depression run into this problem, as also mentioned before. We can cure depression, or we can find cures for it, so sufferers of depression are not ultimately doomed to a Sysiphian trap either.

But why do the things we do in our daily lives make us happy? The simple fact is that creatures who evolve thinking that life is meaningless won't want to live, eat or procreate. They will thin themselves out and the creatures that enjoy life by embracing the chemical high that our brains give us when we eat a donut, solve a math problem or have an orgasm, will ultimately come to dominate the landscape of living things. This kind of meaning is not ultimate meaning. We don't need ultimate meaning. This is why we don't see animals constantly committing suicide. We are also animals, and the same stuff that makes a puppy wake up and chew up your slippers is the stuff that makes our lives worth living. Christian nihilism attempts to convince us that we have an existential crisis, and therefore we must give in to their flavour of superstition.

Christian nihilism cheapens life, it discards everything we find meaningful and beautiful and worth living for. Ask a parent if their children make their lives worth living, if a teenager in love thinks love makes life worth living. The answer is a resounding YES!

This does not offer a complete picture. After all living life can be fun, but sometimes life is a drag. We can find higher meaning, even if there is no ultimate meaning. Stay tuned!

The next part is here: Atheism And The Meaning Of Life. Pt. 4: Christian Misanthropy
atheism meaning-purpose religion