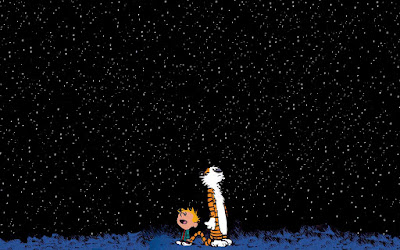 Sometimes non-religious people are referred to as being lost. I happen to agree. I am definitely lost. I am lost in a vast universe without any explanation. There is no reason why the universe is there, and I occupy no privileged place within it or within time. There is no where to really be at, and hence no map of where I am going or are supposedly supposed to be.

This is a frightening concept to many people who are religious, because they believe that they know exactly where they are, where they are going and where they are supposed to be. If they are in any kind of doubt, they believe that the ship they are on is being commanded by a knowledgeable, albeit invisible, captain. They indulge in the feeling of safety and certitude that this belief holds. We are all actors in an extended play with a planned script including a planned beginning and planned end. It provides an emotional and intellectual safety blanket. That is exactly why calling us lost or our lives meaningless is such a strong attack for them. They fear being lost, feeling as though there is no absolute sense of safety and certitude. This feeling expresses itself in different places. Sometimes it concerns justice, because there is no ultimate justice as far as we know. What is there to strive for if we have no specific predetermined destination we should work towards.

The question is what life is about. If you don't believe in any ultimate grand plan for the universe, the question is meaningless. I like Douglas Adams' view on the idea. The answer of 42 is as good as any if the question is meaningless. If I asked you what the meaning was for wave 343 238 905 breaking on the shore or why a cloud on 12 October 1246 was shaped like a banana I'm sure you wouldn't be looking for some philosophical answer to that, so why look for one for ourselves? What makes us require an explanation but a raindrop or a dust speck somewhere does not require one?

Back to being lost. Being lost is a relative term. I am not lost in my city, but if an alien from a faraway galaxy asked for my address, I couldn't give it anything meaningful to go by. The same is true of any kind of knowledge. I can find myself in my immediate vicinity, as being lost in an area means that the feeling dissipates as I find where the stream is, or where that old fallen tree is. In some ways, I am not lost. In some ways, I think that those that labour under the false belief that they know where they are are more lost than I am. Admitting to being lost, admitting to being uncertain, is the beginning of finding out where you are!

When you go on holiday, you always start out lost. After a while you find your way in your immediate area. When I visited London briefly, I found that after my first day of feeling lost and overwhelmed, I could point out which way to go to reach Buckingham palace or the London eye. Could I point out how to get to Surrey? Nope. Just like going on holiday, we are not blessed with foreknowledge of the universe, we are air dropped into it in the middle of nowhere and forced to find our way. But that is part of what I enjoy about holidays, and part of what I like about being lost in the vast universe we occupy. There are plenty of unknown corners in knowledge and in space where we can find new and interesting things. Our curiosity is served a buffet that is as far as we can tell, infinite. If there are people that claim to know the final answer, the ultimate answer, I can't get into that.

In fact I think the most meaningless existence one could have is one where you know exactly what is going on. Nobody likes a movie with a predictable ending, but religious believers claim to know the end of both their own story and that of existence itself. That is somewhat tragic. We are not travellers seeking new wonders, we are toddlers in an oversized playpen, with our parent carefully watching us as we move in a sandbox reality. Everything is already known, so there is really no true discovery, just the unappealing idea of second place discovery.

I don't see it as worrying that I am lost, in fact I embrace it. This applies equally well to knowledge. We are always lost when we learn something new, but the joy of discovery awaits if we persevere.
counterapologetics thoughts