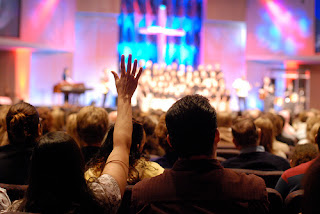 When Marty McClain, an American pastor from Georgia, visited the Scandinavian countries, he asked people about their god beliefs in interviews. The man's facial expressions were very interesting as most of the people replied with a stern no to the question of their belief in god. It was a definite culture shock. What seems clear watching this kind of thing is that our beliefs are culturally reinforced by those around us. In Georgia, I'm sure the question is "which church do you go to?", not "do you believe in god?". It's somewhat easier to maintain a belief if everyone around you does.

It's strange then that atheism seems to grow in places like the U.S.. Despite the strong religious culture, there are many people leaving religion there. But we still grant legitimacy to religious beliefs when we really shouldn't have to. Christianity in particular has a long history, spanning more than a thousand years, and many of the greatest minds of our culture have been Christians and spoke positively about their religion. This lends a kind of legitimacy by authority that's easy to intuitively latch onto.

Christianity is also very well funded. When I leave my house, whether I turn left or right, I am within five minutes of two large churches, and there are more if I keep going. There are Christian schools, and in the U.S. there are even Christian universities. The money that goes into religion keeps it on a pedestal of legitimacy. The number of religious scholars in the west who are Christians far outweighs the number of secular religious scholars. Often apologists tout consensus in their fields, simply because they vastly outnumber secular scholars in their field.

Professional apologists have large organisations that are well funded. Just to compare two examples, Justin Schieber, a relatively well known secular philosopher of religion, has a small YouTube channel with meagre funding compared to the Reasonable Faith organisation headed by William Lane Craig. Christians have all the money and they have all the momentum from more than a thousand years of Christian domination.

What this brings about is the general feeling that there is some legitimacy to Christianity. Many atheists shy away from claiming there is no god. I believe this is because of the sheer bombardment of the Christian belief system in our culture. This pushes many atheists into deeper uncertainty about Christianity's truth than is really justified. If however you ask these atheists if they feel the same about Hindu gods, the answer is "of course they don't exist.". Once we take off our cultural goggles and see Christianity as other people from non western cultures consider it, we are forced to conclude that we lend too much legitimacy to Christianity.

When you take a closer look at apologetics, you see the kind of reasoning that conspiracy theorists engage in. Somehow, it seems to them as though there is a man behind the curtain, controlling everything, and the same spurious reasoning is present that we see in moon landing conspiracy theories. The arguments only really seem legitimate because we are used to granting Christians a free pass. Despite the small number of secular philosophers of religion, theologians have failed to give decisive arguments for the central problems of their faith, such as the problem of evil. We should expect not to see these arguments at all if a god is so apparently real. Some arguments appeal to complicated concepts in physics, but we don't need those things to justify things in our apparent reality. We don't need to appeal to quantum mechanics when we are trying to demonstrate the existence of our pets. A photograph will do. How is it that the omnipotent creator of the universe is less apparent than the existence of dogs, cats and parakeets?

We engage in discussions where we admit that it's not impossible for such a thing as a god to exist, but we scoff at people who claim that they have been  abducted  by aliens or claim that Lady Gaga is a member of the illuminati. Liberal, educated religious believers also scoff at claims of alien abduction, but on a regular basis they claim speak to someone who is quite apparently absent. All tests for such a being fail, and when asked, the old conspiracy theory chestnut is pulled out that that is what it is made to seem like, in this case that god has reasons for not wanting to be tested. Some believers claim that when they look at the world around them, it's apparent that god exists. Illuminati conspiracy theorists that scour pop culture claim the same thing, but for the existence of another entity. Why should one carry automatic weight while the other is the butt of our jokes?

It's hard to overstress the point of this essay, because it took me a fair amount of time to realise the trap. I know what it's like. I think the time for giving legitimacy to the big man behind the curtain conspiracy is probably past its sell by date. I think it's time to realise that if all the arguments for yahweh fail so terribly that it's reasonable to conclude that they will continue down that path. All it would take to reverse the failure is god showing up on Oprah, but this god either does not exist or seems extremely uninterested in demonstrating its own existence, rather requiring his followers to learn the intricacies of cosmology, quantum physics and philosophy.
counterapologetics religion