Is Political Correctness a Thing? 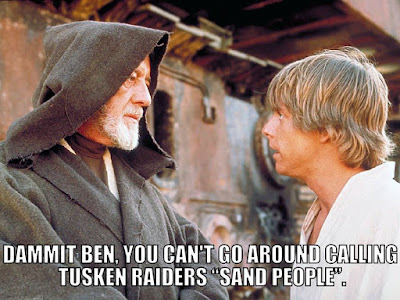 This controversial term is one I don't like using, because I don't think I ever feel the need for it. When things are cliched it's always good to try and avoid those terms. It forces you to think through a concept instead of just repeating it. Politically correct is one of those concepts.


A midget walks into a bar.

Your reaction to that sentence might give us a starting point. The way I see it political correctness is an attempt to avoid or censor things that others may find offensive. Neil Gaiman thinks it is "treating people with respect", but I disagree. His mistake is to think that avoiding offense is necessarily respect. Sometimes offending someone is a deep sign of respect.

That doesn't mean we should fool ourselves. Most people employing the term are assholes. They use the term to try and justify being assholes. In their eyes they are fearless truth talkers that are being attacked by the PC brigade. For the most part, I can't blame people for wanting to vilify someone who is being an asshole. What I am concerned about is that we should be drawing a line. Please watch this video if you haven't and join me after the break.

I don't like this video. I think it's insulting and mean. I think that the person who made this is an asshole. What I don't think is that people should be losing their jobs because they are assholes, which is exactly what happened to this the person who made this video. Beyond vilification, if we create stronger measures against people who offend us, we encourage a society that self censors. In that environment, it becomes hard for people to say what they want because they fear losing their jobs or maybe even worse.

Two things are vitally important here. First, we should aim for a society where it's okay to be wrong about things. I have been wrong about many things, and it took me years to get to where I am now. Some of those things were very offensive. I was definitely homophobic for a long time. If I had felt a risk of expressing myself and losing my job, I would have never found out I was wrong, because if you self censor you never get to argue your incorrect positions and lose. You are always just living under what feels like an oppressive environment where you can't speak your mind.

Secondly, sometimes everyone else is wrong and the lone nut or asshole is right. Of course we can be pretty sure they are not and if you are that person you should really reflect on your position to see if you are actually right, but if we use this mechanism and accidentally censor someone who is right, we run the risk of being wrong and unable to realise it, because those who know what is right are afraid to speak up. If the video above was criticizing Kim Jong Un in an alternate reality where the North Korea ruled the world and the woman in the video lost her job, how would it be different to what we are doing now? What is freedom of expression really worth when it carries a significant risk with it?

Maybe if someone says something stupid, hateful or offensive we shouldn't be calling for their jobs to be taken away from them, we should be talking to them and convincing them otherwise. After all, people are often assholes because they have some skewed perspective of something. When someone acts out, wouldn't it be better to take the opportunity to engage with them and change their minds than to call for their metaphorical heads?

The question that remains is whether it is a good principle to attempt not to offend people. I think the answer to that is a little more complicated. I think we should offend people. We should offend people for the right reasons in the right situations. I think we should balance our offensiveness with understanding, compassion and level headed dialogue. I think this is the best way to get there to be less assholes in the world. Having people fired or removed from a medium is the wrong way, because it disincentivizes openness. Maybe we should be willing to get hurt sometimes to hear the truth, and maybe we should be willing to get hurt sometimes so we can help those that have hurt us or others to not do it again. I just don't think that people deserve to lose everything just because they are wrong about something.