Ego & Humility: Setting Aside The Ego 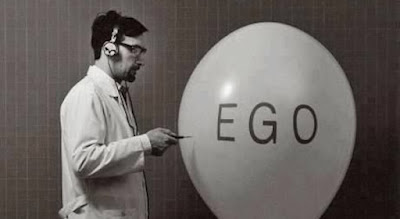 When I came across the problem of my ego attaching itself to ideas, I was worried. I knew it was happening. I could feel the anger welling up inside me when an idea contradicted one of my beliefs, and I was disappointed at myself. It seems like a strange sort of inner struggle, and it was. It was the beginning of the way I used to solve the problem. It's what I like to call ego detachment.

I hope it doesn't sound like a bunch of woo woo to you, but I can understand if it does. It makes perfect sense to me, which is perhaps not enough, but I will try to explain.

The first idea that came to my mind was that in order to be more objective and less reactionary to other ideas, I need to detach ideas from my ego. This meant that any particular belief I had needed to be separated from my ego. I am going to suggest a toy example for illustration. Please keep in mind that it doesn't reflect my positions of beliefs and never has. With that disclaimer in mind, consider a belief in free schooling.

I believe that free schooling is a social good and should be implemented. Subtly, my mind creates a connection between me being good and a belief in free schooling. If someone shows me facts that are contrary to free schools being good, let's say a study demonstrates that low fee schools fare objectively better, I don't immediately respond to the facts, but rather to a challenge to the internal proposition of my ego narrative that "my belief in free schooling means that I am a good person". The challenge to the idea suggests that I am not a good person, because kids will be worse off if my idea was implemented. Oddly, my noble goal of making children's lives better now becomes secondary to protecting my belief, which forms part of my ego. Exhausting isn't it?

It turns our there is a simple solution, and it involves reattaching your ego to the thing that actually matters. If your ego narrative does not involve a proposition such as "my belief in free schooling means I am a good person "but rather one such as "I am a good person because I care about better lives for children" there will be no cognitive dissonance when the challenge arrives. But this needs to be done consciously, because if you are like me, and I'd hazard a guess that you are, your mind crafts many ego narratives implicitly and without your knowledge.

This solution involves self reflection, and that's hard. You need to reflect on why what someone says might make you angry. Your mind will give you quick solutions like "that person just hates me" or "that person is just a contrarian for the sake of it" or "that person wants children to suffer". These are all easy answers your mind will offer to , but that you must reject. You need to fight against the stability and coherence that your mind automatically seeks. This is emotionally painful, especially when you are not used to thinking about it. It actually helped me to comfort myself. To tell myself that even if I was wrong, this didn't make me bad, and that changing my mind when I am wrong would be more rewarding in the long term.

Ego attachment makes it harder to lose an argument and easier to win one, because in order to win an argument you really only need to convince yourself that your self narrative, which you already believe, is right. To lose an argument you have to take yourself apart in a horrific act of psychological self surgery. This is the pain we avoid when we "win" arguments online, but look like a total doofus to other people observing our crushing defeat. Even though I am consciously aware that losing to someone who is right means I have a better new perspective on the world, sometimes I still feel the pangs of my ego narrative being damaged, and I hold feelings of anger toward that person.

Our minds even construct preemptive strikes to defend our egos. We believe that people that hold a certain kind of position are opposed to good. They are evil. This makes us use the best defense for our egos: attack! The notion of detaching beliefs from your ego is not an easy one. It means that we need another way to define ourselves, because we can no longer use beliefs to craft a healthy self image, due to the inherent vulnerability of beliefs to contrary evidence. I hope to address that in a later post, but for now I want to bring accross the idea of evaluating ideas as part of your identity, and finding ways to detach those ideas from your identity, so that your thoughts will no longer sabotage truth in order to protect your beliefs about yourself.
thoughts