** This review contains spoilers, but to be honest there is nothing much to spoil. 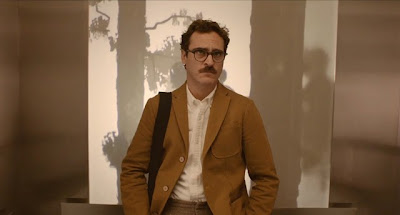 I really like Joaquin Phoenix. In this movie he is a sad hipster going through a divorce, who falls in love with his artificially intelligent operating system. He plays the part of a depressed hipster loser very well, so props to him for that.
Thinking that this will be a score for me, a sci-fi fan and my wife, a romance fan, I picked this movie for us to watch. What I didn't expect was for the movie to fail so badly at doing both genres. Being the nice guy that I am, I watch the occasional romance movie with my wife, and some of them are pretty good. The Vow was a sad movie with hipsters bohemians that I really liked. The Rebound was a romantic comedy I couldn't help liking.

One thing that makes a romance succeed is if the characters have actual personalities. The sad panda protagonist seems to have a personality that makes us want to commit suicide on his behalf, and the OS he falls in love with, Samantha, is just too perfect in every way. The first thing this hyper intelligent AI wants to do when it is switched on is have a relationship with its owner. Pretty weird. Even weirder is that it never really shows how they fall in love. In the world of romance this is a big no no. The moment the couple falls in love is integral in the story. Way to screw that up Jonze. I guess expecting more from the writer of Jackass was a wrong thing to do.

On to the sci-fi bit. The sci-fi in this movie is so utterly pathetic it made me want to cry. It is a fact that the occulus rift exists today. It is quite a wonder that the only solution that the lovers have to meet (and this was the hyper intelligent AI's idea) was to get some random chick off the internet to pretend to be her. You would think that by the time we can build AI capable of naming themselves we would be able to simulate touch in a virtual environment or at least be able to make a passable fembot. The movie pretends that robotics and virtual reality never existed to create an alternate hipster future where you are stuck with an even smaller screen in your awkward hipster shirt pocket where people are constantly mumbling to their computers on the bus. In fact the whole thing views like a hipster iPhone wank fantasy based on the Siri character. Besides falling in love, the only thing this AI seems to be able to do is send and sort e-mails, make tea and transcend known physics to leave you without an operating system on your computer. And we thought Windows was awful!

The movie in general is so full of the ideal hipster world, which should rightly be called a hellish dystopia of mid 20th century style mixed with people who seem depressed and bored with their lives, divorcing each other because of where you should put your shoes when you come into the house. I know where I want to put my shoe: right up Jonze's ass for writing such a shitty screenplay and torturing me with hipster dystopia for 122 minutes.

Towards the end, and in no way am I ruining this movie for you, the AI suddenly decides to bugger off with its friends leaving our depressed meatbag alone. He and his recently divorced friend go up onto a rooftop, and a glimmer of hope twinkled in my eye when I thought that they would commit suicide because their operating systems left them. Unfortunately it just ends there. You don't end a romance movie with an unresolved question like "do the hipster losers hook up" and given that you have molested sci-fi and romance, the least you could do is offer a consolation prize of a kiss between the hipster losers. But nay. It just ends like that.

The movie is a desperate attempt to offer social commentary and to be deep, but it even fails at that. There is no moral of the story, and there is no resolution to the protagonist's dilemma of being a lonely hipster with poor fashion sense.
movie review