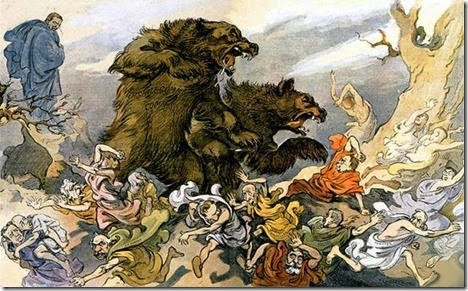 I suspect that the first fundamentalist preacher railed against the evils of the hand axe. There is an odd running theme for religion, and that is that it seems to be an attempt to cement values that are actively being abandoned. Many religious institutions complain about how we are moving away from god, how society is depraved and descending into anarchy, even if we are improving by all empirical measures such as lower crime and poverty. Our apparent divergence from the law of the great deity is the great harbinger of doom. When we cure diseases or learn about the atom we are "playing god" and that is not okay, just as it is not okay to play with daddy's shotgun. It's going to hurt us in the long term, we'll see! There is a real fear that if we are masters of our own fate, that fate must necessarily be our complete annihilation at our own hands.

What is carried along with this kind of thinking, is a deep misanthropy and pessimism about the ability of humans to solve their own problems and steer their own ship. If we are just a speck of dust in a sunbeam, what the hell do we know about what to do next? We are all vile, corrupt and self serving, The theme of religious fundamentalism seems to always include these feelings about humanity. The only way to overcome our depravity is to surrender to a higher power, or more commonly, the chosen representative of a higher power. You see, when a preacher is saying we should surrender ourselves to the will of god what that preacher is really saying is that we should surrender our will to him. We are hurting the feelings of an almighty benevolent being, and to avoid it turning its back on us, the preacher knows what we should and shouldn't do.

The negative bias against humanity that is characteristic of fundamentalist religion is almost always accompanied by a deep misunderstanding of how to culture the homo sapiens primate. It's almost universally believed under these misanthropes that more laws will make a more moral society, because people are only good if they follow a strictly regimented life with a law to answer every potential moral dilemma. You just don't want them to think, because they are all dumb and depraved and worthless in the eyes of god after all.

The second misunderstanding about humanity is that the way to enforce laws is to make their punishment totally disproportionate to the crime. That is why a fundamentalist does not blink when she-bears tear children asunder for making fun of a bald guy or an entire world is drowned for their earthly transgressions. The belief that these punishments will make an example and prevent people from committing those crimes again out of fear drives the core jurisprudence of these misanthropes. That is why they will point fingers at the sky and claim divine punishment if some awful tragedy strikes, all apparently because laws they deem moral are not being followed.
religion thoughts