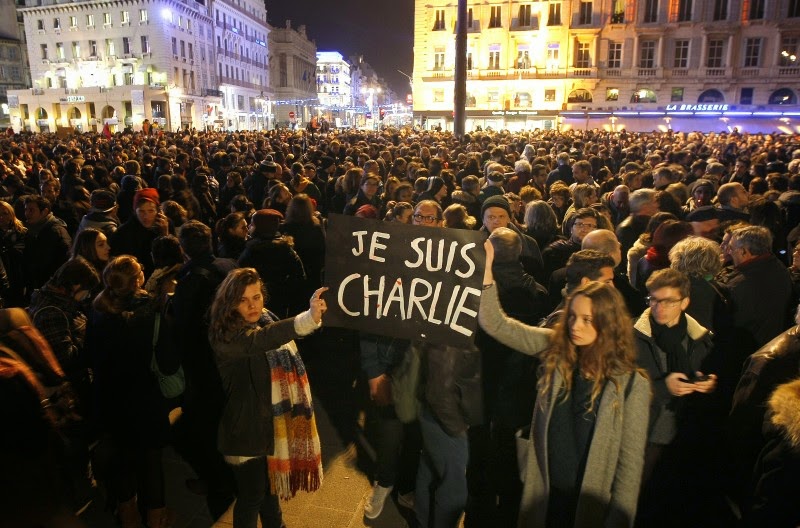 We have barely stepped into 2015 and Muslim extremists have already tainted it with blood. But there is a lot more going on than just that.

One of the greatest things that western societies hold dear is freedom of expression. The war for that freedom was fought over hundreds of years and involved torture and burning at the stake of people whose voices we may never hear because they were erased for supposedly being toxic. Thanks to Cosmos we know the story of one of them: Giordano Bruno. One of the greatest sins of our liberal society is the burning of books or the stifling of speech. In fact as much as I think that the Quran and Bible are deplorable books and despite owning 3 Bibles I don't think I could ever bring myself to burning any book.

Yes, it's true that a dozen people died, but a spear has been struck into the heart of what makes our societies tick: the idea that you should be able to express yourself without fear.I am afraid of Islam, and I think that many people share this feeling. That is the purpose of terrorism. To control by terror. If we take things into perspective however we might be surprised, because after all the population of France is about 66 million. If 1% of France drew a picture of Mohammed and published it online that would be about 660 000 people. It would take more than an AK-47 and RPG to murder that number of people.

What this shows is that these attacks, while scary shouldn't discourage those that want to express themselves, because the more they murder us, the more brave artists will come forward and blaspheme to show their disrespect for an idea that makes no sense whatsoever.

Freedom of expression is not an option in a happy, healthy society; it is a cornerstone of it. Attacks like these are a clear message that we should suspend our freedom out of fear, but the truth is that we should do the opposite. We should confront our attackers by behaving like any rebel would when being told what not to do. We should lash out by doing the thing they hate more, because they can't kill us all!
comment thoughts