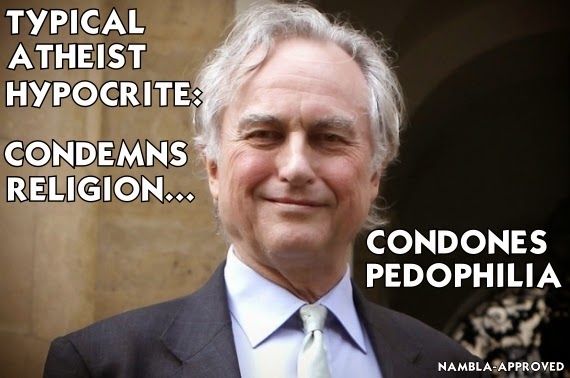 When it is pointed out to Christian apologists that priests molest children or that televangelist prosperity preachers milk viewers to build empires of wealth they are quick to cry foul and remind us that the behaviour of some people within a belief system or movement are not necessarily representative and that such criticisms are unfair. However when a prominent atheist, usually Richard Dawkins, makes some statement on some social issue on twitter apologists are quick to run to their little blogs and go "See! That's the problem with atheism right there kids!".

I don't involve myself in Dawkins controversies because personally his beliefs about gender equality and sexual abuse don't matter to me. I would hazard a guess that being an old Brit has more to do with Dawkins' opinions on social matters than his atheism does. He is only a spokesperson insofar as he speaks about atheism, and even then, he has become one voice among many, not the pope of atheism as apologists make him out to be.

Of course the previous pope of atheism was Stalin, apologists' goto example of the result of atheism. It hardly matters that pious crusaders pillaged, raped and killed in the name of Yahweh. What matters even less is the question of whether Stalin's atheism was the actual cause of his actions, or just an irrelevant datum among many. People often misunderstand the relationship between powerful religious institutions and the proles in history. The lower classes always looked at the clergy with a mixture of awe and suspicion. It's true that religious organisations abused their power and overstepped their mandate often, using divine authority as an excuse to use and abuse commoners. The clergy was a social class that threatened the sovereignty of the people due to its power and influence, and far from atheism being the driving force to the destruction of the church, their power and wealth were what drew the ire of the common people. By arbitrarily choosing a quality or opinion of someone or some movement you don't like and dismissing the rest you run the risk of missing the really important part: the real cause.

So if Dawkins was found with a knife in his hand after killing twenty babies the truth is that it doesn't matter for atheism. Dawkins' ideas on atheism and biology too still have to stand on their own merit, because "would you really defend an argument made by a baby killer?" is an obvious ad hominem, as is "Would you defend a belief held by a mass murderer?". Christianity similarly is not false because of the crusades or because countless priests have molested children. There is no need for atheists to defend Dawkins if he is wrong about something, just like there is no reason to blame atheism for any shortcomings he may have as a human being.

If we can successfully see ideas isolated from those who put them forward, we would have a lot less trouble absorbing knowledge around us, because occasionally someone who is wrong about everything is very right about something and we can't afford to ever miss out on the truth.
atheism counterapologetics thoughts