Dishonest Apologetics: Part 1. The Set Up 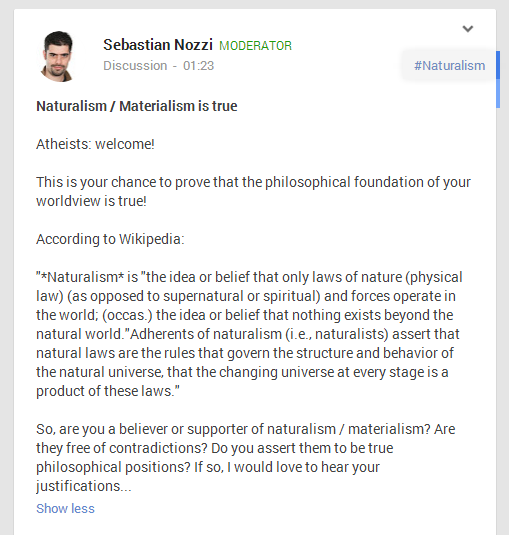 Having had discussions with +Sebastian Nozzi before, I can guarantee anyone taking part that atheists are not in fact welcome in this discussion. The entire post is a set up, intended to fool any atheist into accepting a burden of proof they cannot possibly shoulder. Why?

Most atheists I know are agnostic atheists. They make no claims about the absolute existence or non-existence of gods. Apologists have responded by calling atheists naturalists, defining the term naturalist to their satisfaction and then forcing the burden of proof onto atheists. If you were suckered into this, you now have to be omniscient. You must explain the exact nature of the cosmos, because you must have eliminated every single possibility of any realm beyond the natural. You must reject any agnosticism.

I don't think Sebastian is being deliberately dishonest, he is just picking up on the intellectually bankrupt tactics of other apologists.

The naturalist's position is that there is only a natural world, because as far as we can know this is the only world for which there is evidence. Naturalists value evidence. Let's see the description from the Naturalism.org website:

"If you don’t believe in anything supernatural – gods, ghosts, immaterial souls and spirits – then you subscribe to naturalism, the idea that nature is all there is. The reason you’re a naturalist is likely that, wanting not to be deceived, you put stock in empirical, evidence-based ways of justifying beliefs about what’s real, as for instance exemplified by science. You probably (and rightly) hold that such beliefs are usually more reliable and more objective than those based in uncorroborated intuition, revelation, religious authority or sacred texts. Kept honest by philosophy and critical thinking, science reveals a single manifold of existence, what we call nature, containing an untold myriad of interconnected phenomena, from quarks to quasars. Nature is simply what we have good reason to believe exists." (My emphasis) [1]

Naturalism is not an absolute metaphysical claim of anti-supernaturalism, even though the positions seem dichotomous. The conclusion has been drawn from an epistemic value for reason, logic and evidence. It is not an a priori assumption or belief.


"Are they free of contradictions? Do you assert them to be true philosophical positions? If so, I would love to hear your justifications...﻿" [2]

Unlike more subtle apologists, Sebastian tries to explicitly shift the burden of proof here. The first question is probably bait to bring up the EAAN, an argument that rubbishes metaphysical claims. Of course old school epistemic scepticism can also be deployed here. The goal of this kind of apologetic is not to convince anyone, only to distract from the glaring problems of theology, such as the fact that the resurrection remains without evidence. If a naturalist was given ample evidence of the supernatural, that would be a good time to abandon the position, not when someone tries to shift the burden of proof to the naturalist to force them to prove that something invisible does not exist, which is an absurd and impossible demand.
[1] http://centerfornaturalism.blogspot.com/2008/11/worldview-naturalism-in-nutshell.html
[2] https://plus.google.com/u/0/103744906976128830230/posts/GsmiBENeDMX