The Existence Of Nothing

on January 18, 2014
The concept of nothingness has been something that I keep returning to. It is interesting that such an abstract concept can contain such confusion. In our intuitive view of the universe, nothing is not the absence of anything, it is the absence of something specific. If a cup is empty, we say there is nothing in it, but there is air in it. If we suck the air out there are quantum fluctuations and virtual particles that pop in and out of the empty space. We can never observe absolute nothingness, because absolute nothingness implies a lack of existence. Existence is what we intuitively observe as objects in spacetime, or maybe even spacetime itself. 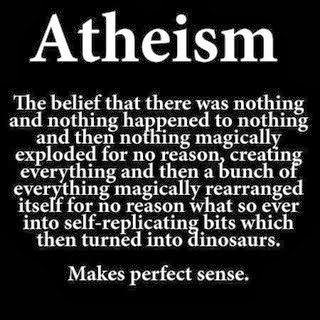 The common parody of atheism on the left is plainly wrong. There was never nothing. because nothing cannot exist, and the big bang was not nothing either, it was the expansion of space from a small point to the universe we know today. The rest is also flawed, but I won't deal with that bit here.

The major error in such thinking is thinking that absolute nothingness could exist! Indeed according to christianity god brought things into existence by saying words. Our concept of creation is really just transformation. When an artist creates a painting a mental picture that did not exist is created, but in the real world the atoms that make up the paint on the canvas had been around a long time before, and were formed in nucleosynthesis in stars, and big bang nucleosynthesis before that.

What we are left with is a problem that nothing is a concept relative to our intuitions of the world, but pure emptiness has never been observed. Someone might ask what is happening "outside" our universe. If we consider outside to be in the absence of spacetime, the existence of anything in the way we understand existence makes no sense. If something is matter existing in spacetime, then "outside" the universe we would have nothing, at least by some definition. But the term nothing is relative to something, such as an empty cup, so maybe "outside" the universe we could find unthing. Unthing would be not something, but not nothing either. Unthings cannot be geometric because geometry is a property of space. We cannot even say that unthing is, because is does not really make sense without spacetime either.

The point is that sans spacetime, we are stuck. Our human intuitions fall apart. We are stuck with an unfathomable. I can't say unfathomable thing, because a thing is relative to the spacetime it occupies.

Alvin Plantinga, a christian apologist, attempts to make an argument against naturalism by stating that there is a low probability that our intuitions about metaphysical matters can be correct because evolution selects for survival, not for accuracy or truth. What Plantinga does not realise is that if his conclusion is wrong, namely that naturalism is wrong, and it turns out to be right, we cannot think clearly about unthings and the unfathomable sans our universe. This also means in effect that our intuitions about the supernatural (which is something not bound by spacetime or the universe) have a low probability of being correct. In other words supernatural gods are unknowable unless his premise that a god instilled intuitions about the supernatural in our minds is true. Our complete lack of ability to think about unthings and the unfathomable seems to contradict his permise. Our language and our thoughts are replete with spaceotemporal concepts. We even associate our emotions with spacetime when we mention a hard(hardness is a property of matter) task, a heavy hart or a deep thought.

People who subscribe to the idea that nothing is some kind of thing are annoyed by the likes of Lawrence Krauss, who points out that empty space is not empty, and what we consider to be nothing in our thoughts actually has stuff in it. The concept of nothingness exists, but it seems as though the concrete nothingness is a purely fictional concept concocted by minds that were never adapted to consider it. Imagining absolute nothingness is no different to imagining a tesseract. It seems that we are doomed to marvel at its shadow, fully unable to visualise it.