But there are others. Interesting things . I'm not going to bore you with too many of them. So I will stick to the three projects I like to follow.

The name of Haiku is pretty neat, but take a look: 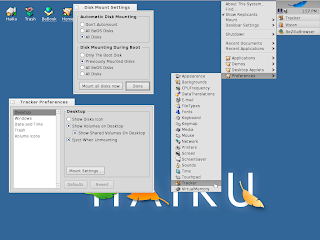 That looks pretty retro, and it should. Haiku is an open source rewrite of BeOS, the operating system that in the 90s dared to challenge Microsoft. Be Inc made BeOS and R5 and you could install BeOS on your Windows partition into a file. It was pretty clever and they were trying to get OEMs to distribute BeOS on the same drive as Windows as a dual boot. Microsoft did not like this, and according to Be Inc Microsoft was actively screwing them with OEM partners. Be crashed spectacularly and ended up selling the OS for a meagre $ 11 million to Palm, who also seems to be tanking now.

Haiku is an operating system with a modular kernel. What this means is that instead of having the kernel deal with everything, the kernel is a minimal piece of the operating system that gets everything up and running. Then services take over and run the GUI, the sound, interface with hardware like USB etc. This modular design makes it unique. Microkernels were heralded as the new generation of kernels back when they were envisioned in the 1980s. Because neither Windows nor Linux are microkernel based operating systems you could say that Haiku is ahead of the pack in a very big way. Modular design is important in software, for the same reasons that having different parts to a car is a good thing.

The file system for Haiu, BeFs BFS is also unique, having file system level support for meta data, allowing the file system to behave a little like a relational database. The small yellow titlebars mean that you can stack applications on top of each other and they will behave like tabs!

Haiku boots extremely fast and is an extremely simple operating system. The feeling of minimalism and cleverness is all around it, which is why I like it so much. It is a design masterpiece, and it feels as swift and simple as it acts.

You can check it out for yourself: http://www.haiku.org

Linus Torvalds had this to say: If 386BSD had been available when I started on Linux, Linux would probably never had happened. BSD Was the Berkely Software Distribution, a bunch of programs that were given out to people with UNIX. Eventually all the Unixy parts of BSD were replaced with free versions which became 386BSD, and AT&T sued the crap out of them for copyright infringement. These legal troubles slowed down BSD development, and its future as the standard free operating system was compromised severely. This brought about the BSD license. A license which states in short: "We don't give a shit what you do with the code, but for God's sake just don't sue us". This is a fairly popular open source license which allows developers to share without restriction or threats from litigious assholes.

FreeBSD and NetBSD were born after all the legal troubles ended and FreeBSD has become a somewhat successful operating system. OpenBSD is another variant of BSD that focusses on security. OpenBSD has rigorous review processes to ensure that code is secure, and don't allow any dark non-free binaries to enter because they can cause security problems. It's notable that Windows 95 stole its network stack (winsock) directly from BSD. After all, the BSD license let's them do this, and this explains why you can see (C:\Windows\System32\drivers\)/etc/hosts on win-dos. Microsoft did not do it very well however, so don't think for a second BSD and Windows are on the same level when it comes to networking.

FreeBSD is definitely retro. Some of the binaries still have credits from the seventies in the same way that Linux was, but its much closer to the real thing. BSD Is extremely stable, and is known to have the most impressive uptime numbers of any operating system (last time I checked). FreeBSD is great for servers. You can even host a service inside a sandboxed jail environment with its own hostname.

FreeBSD has a rather unique way of letting you install software. All the possible software you can install is represented by a blank directory structure called the ports tree. You browse to the directory of an application and type make install and hey presto, the software source-code is downloaded, compiled and installed on your system. This allows you to pass custom compilation flags and other goodies. I never did any of those things, but its cool watching all your favourite software compile in front of your eyes. It somehow feels like fresh bread being baked right in front of you.

If you want to experience FreeBSD you will have a hard time, because it's not exactly user friendly. The installation is scary if you are not familiar with it already. PC-BSD bridges the gap and makes it accessible to everyone. It also adds a new package management system called PBI. PBI is a blob installer like the ones that we are used to in windows. I'm not sure why its there, but it seems to work just fine, and it possibly makes it easier to package software.

PC-BSD Is very well done, and I would definitely recommend it if you want to go less mainstream than Linux but not be completely alone. It is also extremely easy to use. Because of less legal restrictions, they give you commercial NVIDIA drivers and Flash right out of the box that Linux does not give you!
http://www.pcbsd.org/
http://www.freebsd.org/

This OS could be classified as being insane.

The above screenshot is not windows 95. It is ReactOS. ReactOS is a Windows clone operating system that was started some time back. A lot of the work that the ReactOS team does is reverse engineering Windows to figure out how the hell it works. ReactOS is a very slow running project, but the mere fact that they are trying to do this should be a testament to their insanity.

The obvious comparison here is Windows, and ReactOS is not Windows. It works together with the WINE(Wine Is Not an Emulator) project that focuses on bringing Windows applications to Linux and OSX. Older applications will work well on wine and ReactOS, but the overall quality is still sub-beta. It's interesting that they have multiple desktops and a free icon set. It looks like some weird customized version of Windows 95. One day maybe it will be a viable alternative to Windows.
You can check it out at http://www.reactos.org/

If your not so keen on letting these operating systems loose on your pc then you are welcome to use a virtual machine or a live cd if it is supported. Have fun!