on March 18, 2009
Since there is growing competition with music players on Windows lately, I decided to shop around and try them out. Can they replace Winamp? How does foobar2000, iTunes and Songbird measure up to the great Winamp?

I am an avid music listener with a large collection of music. To manage that I need a good media player. Before I start I'd like to say who is the current champion and long time player on my desktop. Winamp. There is a reason I don't want to use Winamp anymore. Winamp seperates playlist from media library and makes the media library a sort of addon. New players have a singular interface where all your controls and media is. The multi window thing just doesnt do it for me anymore. So I decided on this round of installing Windows XP for the millionth time, that I would shop around. The first contender: 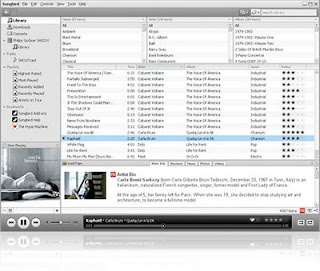 Songbird looks promising and there has been a lot of hype about it online. There seems to be quite a community around it and there are plugins and skins to choose from. Everything from the website to the installation looks sharp and well done with pretty artwork.

The interface is nothing amazing, but then I wanted a tool, not a piece of art. I did however curiously download 2 themes that looked good on the plug in site, but looked pretty bland when I applied them. Also like Firefox(which is also XUL driven) the application needs to restart to load themes and plugins. This is a bit of a pain.

This was the deal breaker for me. I added some files to my library which worked quite nicely, and set folder monitoring to on. In Winamp this passively load new music into your library. In Songbird this eats up the entire UI and makes the program unresponsive with a modal "Adding files to library..." dialog in the middle of the screen. So you cant do anything when your loading music into the library. Right clicking and getting album art is a gamble. It may show a dialog or it might just do nothing with no indication of failure(that I could see). I could live with most of these things. What I couldn't live with was the fact that scrolling through my list of music was sluggish. And so I uninstalled Songbird.

I don't want to knock Songbird down. After all it is a relatively young player. It has a lot of promise. May I will try 1.x when the performance issues have been sorted out.

Foobar is a very small minimal player. It's pretty fast and snappy and has all the necessary elements for a good music player. It's not as impressive as the others, but it gets the job done.

Foobar has the bare basics in user interface elements with no flashy anything. It does however not look bad either. Theres not much to say but it works great.

The user interface for Foobar is complex. There are settings that I don't care about in the preferences and things I will never set. I guess this is nice for someone who needs these features but I don't. I liked the flexible UI but couldn't really find my media library, even though I added folders to it. Usability is not so much an issue in Foobar as it does what it needs to simply.

My problem with Foobar was that it didn't support Last FM, and it didn't have a nice media library. It looks like it's more geared toward old style "add files to playlist" usage. It is however a great player and I feel like I don't want to uninstall it. 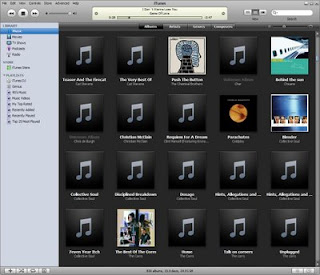 Apple always has quite a bit of polish on their products. And this makes all their stuff well... pretty impressive. My first fear of iTunes was that it would be too apple-y. The download was rather large, 69 megs(coincidence?).

The first thing I did was try to see if I could change the default skin. It's not that I don't like Apple's brushed metal fetish, it's just that I like things to be a bit more consistent with my desktop. I couldn't find any such option. I also had this big fat message saying Genius sidebar is not available in my country. No problem. I probably won't miss it(since I don't know what it is.) Coverflow view is really impressive. I am really liking this interface

iTunes decided it would be a good idea to convert all my WMA files. I agreed since I hate WMA. Trying to download album art required me to sign up for an iTunes store account. When I was doing this I was slapped a EULA that if printed could wipe out at least one hectare of trees. And now it's time to uninstall. If I want to use get cover art I need a credit card to get an account. Screw it, I'm not getting a credit card just for that.

This really sucks. It seems like a very nice player. Being impressed with cover flow I would have really liked to use it with album covers, but Apple seems to want a credit card for that. This player is made for Apple, and not for the user... sadly. They want me to buy songs from them, so never mind that then.

And the winner is...

Winamp by a landslide. Winamp still reigns supreme on Windows. Songbird has a chance of competing, but will probably have more market penetration on Linux. I wanted to list Amarok 2 here, but having tested it on Windows I wasn't convinced. The user interface in 2.0 took a strange turn and I can't live with that yet. KDE applications are still too unstable on Windows anyways.

It sucks that I set out to replace Winamp and ended up using it. I guess it really does kick the Lama's ass, and all the other Windows music players' asses too.

From Boom to Bust: Self Destructive Mental Work

Athletes have to plan their exercise because overdoing it causes damage, but for creative and intellectual work there isn't such a thing. You're brain is not a muscle that will hurt if you push it too hard with intellectually taxing work.

This is evident in learning, when you reach a point where you cannot absorb any information. You feel physically tired and you are pushed to end your learning for the day. But if you tried to push further until the early hours of the morning you would be much less able to perform at the same level the next day.

We all know this and acknowledge it. I have been pushing myself too hard for many years, but it really doesn't seem that way, because there are long intermissions of inactivity. I've never known why I feel demotivated, lazy, and lacking creativity for extended periods of time. Months even. Writers call it writer's block. I feel like it is a complete creative block.

When I hit a creative patch, I would try to utilize it as b…

The Natural Case For Morality

In the post titled Can Atheists Be Moral? That’s the Wrong Question , shared by +Andrew honest , the author of the article makes the excellent point that atheists can and do behave morally, even according to theistic standards. Atheists I know are often very honest and sincere even to a fault. Of course, I don't want to generalise, maybe I have been lucky with my sampling.
With that aside, the post goes on to address relativism, cultural differences, genetics and instinct as the sources of moral behaviour. I can't speak for relativism, as I am not one (despite apologists' repeated assistance that all atheists are), but the natural case for morality is not adequately understood by the writer of the post to even be relevant to making a case against morality as a natural phenomenon.
In the section titled "Morality is Not Genetic", the author states: "If we truly believed that we merely “dance to our DNA” as Richard Dawkins stated, we would have no reason (or g…