PC-BSD has a quick installer finishing the entire install in about 20-30 minutes. The installer is easy to use and fairly intuitive, the only problem I had was that it would only work in VESA mode, which is ok. I didn't like the pictures with the stereotypical people, but hey... it's only 20 minutes, so who cares. I opted for the full DVD which was about 1.7 GB. There isn't much software bundled with it, but some nice stuff is included.

That covers quite a few needs.

Booting up and meeting my new KDE 4.1 desktop wasn't so bad, except only one screen was working right. Apparently the NVidia drivers are included in PC-BSD, but they didn't work for me, so I downloaded the new version. After installing it and running nvidia-xconfig --twinview (for my dual monitor setup) KDE was working great, even allowing me to put different wallpapers on each monitor. 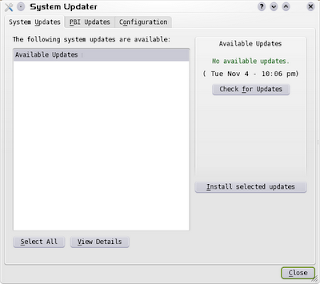 After the desktop is up and running the PC-BSD update manager checks whether there are updates for your programs. If an update is found for either the system of a package you have the option of updating. This saves you from having to know when new versions of software come out so that you can go to the vendor sites to download them. So in no time I was running OpenOffice 3, Pidgin was updated, and some security patches and bug fixes were also applied... pretty sweet

I went to PBI dir to download some software. Neverball was first on the list so that I could test my graphics driver. Neverball is a pretty cool game too. I downloaded the PBI(Portable Bsd Installer, or Push Button, whatever) and double clicked on the file after download. The nice thing about it is that it also shows the Icon of the application... Sort of like Windows installers... well some of them... and not MSI. When you run the PBI you are asked to enter your root password. This is a really really good thing. If your family or girlfriend is using the pc that mean they cant just install any old thing... if you have the root password. This also means malware can't install itself.*

I am a little bit of a perfectionist when it comes to looks. This is why the PC-BSD desktop was lacking for me a little. The Wallpaper was really nice looking, but I changed it because I like nature scenes, and KDE-Look has some really nice ones. The fonts were all sans seriffy. Easy to change yes, but for newcomers it might look a little disappointing. I think a little more attention should be paid to that. Also I think some kde settings wouldn't do harm, like disabling Kicker... just for now, until everyone adjusts and KDE 4 is more mature. Other than that everything looked and worked great.

* I realize there is no malware for FreeBSD or Linux... yet. I mention it here because it solves a problem by never letting the problem happen in the first place, and it is a fairly valid question when you are wary of Windows security.

I Hope the PC-BSD Team the best of luck and many thanks for such an awesome package.