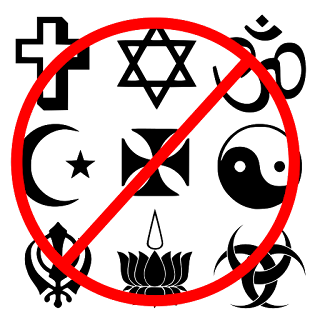 It's very much in fashion, especially for newly minted atheists, to call everything they don't like a religion. Until you learn that dogma, orthodoxy, authoritarianism, schisms, cults of personality and all the other negative things we see in religion are not unique to supernatural beliefs.
I've even seen some religious believers engage atheists in this way. Apparently if they can convince an atheist that some belief they hold is a religion, the atheist must reject it out of hand simply because they don't believe in religion. The trouble is that this relies on a very skewed, vague and infinitely malleable definition of what religion is. To use words meaningfully we need to restrict them to be specific enough to make sense, and religion defined as a bad and wrong belief is not tenable because it isn't useful, and this is exactly the kind of thing that is happening here.

That nasty little premise 3 is what drives the argument, and I see it in many atheist circles.

The final blow is when you start to look for dissimilarities instead of similarities and they pile up to the point where you forgot why you thought the two things were similar in the first place. It takes only a tiny scratch beneath the surface of this type of argument to see how fallacious it is.

In my opinion it's a lazy way to try and win an argument with an atheist, because all atheists accept that religion is false, so merely equating something to religion automatically wins the argument, because the atheist must reject all religion out of hand. It really is painful to read these types of arguments. I would call for an end to this argument, but it will probably fall on deaf ears. Gotcha arguments with little substance are too easy and too tempting. It has another rather nasty side effect. Some atheists place religious people in a category of unreasonable and dogmatic, and it can be dangerous to place people in that category regardless of whether they are actual believers or not, but spraying every belief you disagree with the colour of religion you can come to believe that the people that hold to that belief are also unreasonable and dogmatic.

Each idea deserves its own day in the court of reason, without desperate false equivalence coming into play. If we don't take the bait, and accept that there is a possibility that people hold different beliefs to us for what they perceive to be completely valid reasoning, maybe we can come to a better understanding of that belief system. By merely equating another person's belief with something you know to be false, you are just excusing yourself from the hard task of really thinking about it.

A (no doubt incomplete) list of false claims to being "religions":
So either we are all irrational raging zealots, or perhaps the extension of religion to anything we disagree with is not a very good argument.
argumentation discourse thoughts