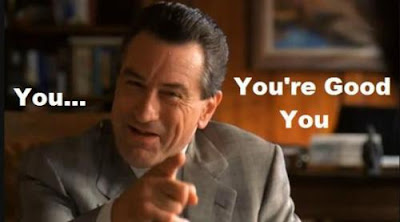 There is a rather annoying, unproductive and insulting behaviour that is very natural to human beings who disagree. At some point one party in an exchange may give up trying to convince the other with arguments and instead attack the motives of the other party. Because it is the 21st century,  you will be treated with a nice little psychoanalysis from the person who disagrees with you. According to them, your disagreement stems not from a genuine difference in knowledge or understanding, but a deep seated psychological malfunction on your part.

Recently, I was pushed onto the couch and analysed by a fellow netizen. Here is the diagnosis they gave me:


"I see now that I have perhaps tread a little too closely to some of your own deeply held beliefs about the world - a set of beliefs that I cannot be sure of but which I suspect are largely a part of the progressive faith. As I see it, you are engaging in motivated reasoning to support your continued adherence to these beliefs that form a central part of your identity."

Why is this behaviour wrong? Well if you want to convince someone, telling them that the reason your arguments aren't convincing to them is that they have a psychological problem is in itself not very convincing. On a very basic human level, it is also deeply insulting, but there is a much bigger problem with psychoanalysing people on the internet.

You don't know them very well. We interact with people online through small little stamp sized images and messages here and there. To propose that something as complex as a human being can be known this way is quite foolish. Usually this kind of thing doesn't get under my skin because I know that the person on the other end doesn't know me. Their analysis is based on a very small set of information that doesn't come close to representing me as the complex person I am.

And every single human being is like this. Every creationist, every anti-vaccer, every atheist, vegan, liberal or anarcho syndicalist is a complex person that can't be psychoanalysed by amateurs on the internet. In fact people who go to intense therapy with psychoanalysts are sometimes misdiagnosed. How then can a random person on the internet have any semblance of accuracy when analysing someone through the interwebs?

Maybe you are screaming in your head that this is a type of ad hominem fallacy, and that is true. The discussion ceases to be about the topic and starts to be about the person: you. It becomes personal.  The merits of the actual arguments fall by the way-side. But this sort of misses the point. It's easy to convince ourselves that the reason our arguments are not convincing is because there is something wrong with the other person. It is the salve we use when we realise that the arguments we expected to succeed didn't work.

The deeper lesson is that we need to look at our own behaviours and arguments first, and at best we can say that our arguments were not convincing to someone else. I made some mistakes in the discussion where I got the free therapy quoted above. I could have done things better. Other people might have different views of reality based on their immediate environment. They might have a psychological need for their beliefs, but really it isn't for us to conclude that about others on internet discussions. Besides, it makes you look like a giant jerk. So before you think of telling someone why you think they haven't changed their minds, consider how little you know about them and how justified you truly are in making such conclusions. This goes doubly for me, since I'm pretty sure I've also done it.