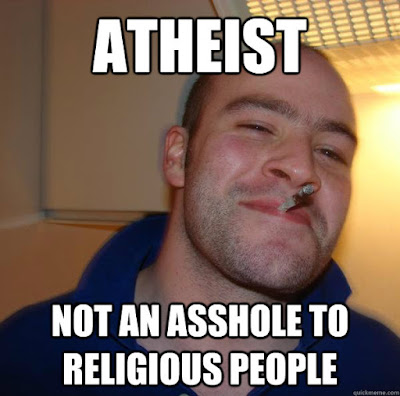 If you are an atheist, you represent atheism. Recently I've been in quite a few discussions on how atheists behave on the internet, and among those discussions there are different opinions as to how we can improve our interactions with believers. There is a disturbing view held by some atheists that a single person doesn't represent the movement, so if that single person behaves poorly it's totally okay and we should just move on and let it go.

If you haven't seen it, please watch it through to the end. Now consider this. This guy represents you as an atheist. You may think "he doesn't represent atheism" and formally that is correct. It's also correct that people shouldn't look at this guy and make a generalization about atheists. But we live in reality where people make fallacious conclusions, so when someone who knows little about atheists sees this, they use this guy as a template for what atheists are like. Even though the guy is clearly behaving like a huge asshole we will never be able to live this one down because whether we like it or not, people generalize from seeing this.

Do you need evidence? Just read some of the comments:


Hah. 'Militant' Atheists. They complain about irrational people and bigots, but are bigots and irrational themselves. Any smart person would just ignore the preacher of any religion and move on with their day.

That's how i imagine most of the atheists on the internet. Crazy

here you see an atheist in the wild

that foul soul is the embodiment of atheism.. excluding the greasy brown hair, neckbeard, fedora and cheetoes fat

Now to be fair lots of people were pointing out the fact that this guy is not representative, and lots of people expressed understanding. But that is not the point. The people we should be trying to reach, the people who are victims of simplistic thinking, are the ones that get a bad impression from this guy. Is that really an image we want to cultivate?

Lots of atheists expressed their distaste at this guy's behaviour. But this guy is an extreme case. There are many atheists around the web that do exactly what this guy is doing in text form and atheist YouTubers behaving badly in video form. These channels have thousands of subscribers. I don't want to drag any specific channel into this though, because it distracts from the point. What do you want atheism to look like to outsiders? If you support these channels you are sending a message that it's okay for atheism to look like that. And we can say these people don't represent us, but here is a particularly bad one speaking to that point himself:

Yeah......you say I don't represent atheism, I seem to have several thousand people behind me. How many do you have? That is pretty clear indication that my thoughts and beliefs are hitting home and well grounded. Supported in full by thousands of total strangers.

They know they have support. They know that calling believers childish names gets subscribers, and they love the attention. We constantly go on about how Westboro Baptist Church is wrong, but we support the equivalent in our atheist communities. The person who made the comment above made a comment on a believer's YouTube page calling him a c***. People who think that is witty and incisive need their heads checked. The fans of this channel defended this guy. Fellow atheists, thinking it's totally okay to behave this way. This is an example of how those people respond:

I don't see myself as being a part of some cult where we have guidelines or doctrines that tell us how we should act and what we should say and how we should say it. In fact I think the worst impression of atheism you can give is the one I'd get from someone like you who comes off as some type of religious authority figure.

Other responses included calling me boring, accusing me of whining and thinking I am a killjoy and think that we should treat believers with kid gloves. I believe that mockery and firm statements have their place, but that common decency should be a given.  Telling someone not to go around calling people childish names is telling them to be decent members of society.


Aggression is the worst way to resolve intellectual disputes, and attempting to shame and insult others never changes their mind. So when people do this they work against their own goals of a better society. But some of these people who do this don't have our best interests at heart. They are just in it for themselves. For example:

Hmmm, my exponential subscriber growth doesn't impress you......vs your 0 count. Wow. I'm hurt. The money I make off my videos just won't feel the same now that you aren't impressed.

This is the caliber of atheist that represents you, me and every other atheist in the minds of the people that see how they behave. Thankfully, the person who posted this loses subscribers quite often, but amidst new growth, it's hard to see an end to the problem.

So when you talk to believers, when you reshare a post or make a video, keep in mind that you are representing a position we all share. If you do it poorly you act against the goal of changing peoples' minds. By just subscribing or liking something, you have a minor effect on the course of history. Everyone sees what you do on the internet. Every comment is the past equivalent of a published letter.

If you see someone else behaving badly, don't just walk on by, tell them the effect of what they're doing. Let them know that they are self sabotaging, and by extension sabotaging all of us and society in general. We need to find ways to increase meaningful engagement on the internet and to make it clear that people who hold our position value decency and respect, and are willing to tackle differences on the basis of the facts and arguments, and not by screaming louder or calling people names. If we look like a bunch of juvenile internet trolls we won't achieve a damn thing, but if we behave like thoughtful, humble human beings we will get the audience of the people who most need this change, the victims of organized religion.
atheism discourse