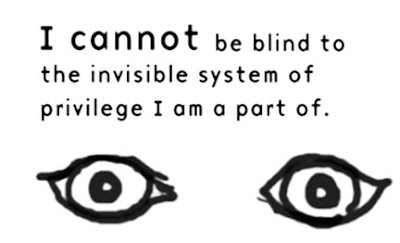 In modern discussion about social issues a recurring theme is privilege. RationalWiki has a fair definition of the term as used in the context of social issues:

Privilege is the benefits and advantages held by a group in power, or in a majority, that arise because of the oppression and suppression of minority groups. Often these benefits and advantages are not codified as legal rights and arise as secondary qualities to suppression (see the examples below). This causes them to become difficult to spot, and remain unseen or unrecognised. This aspect in particular is known as privilege blindness.[1]

I think that privilege as conceived here is a flawed concept and it shifts focus from what the real issues are supposed to be to an insidious form of blame and stereotyping that causes people who would usually be sympathetic to social issues to stand their ground and choose sides. If I am right then much of the work in addressing social issues is self defeating because making use of blame antagonizes the very people the original message is intended for.

The idea of privilege itself is not wrong. It is not incorrect to state that some groups in society are born with silver spoons in their mouths while others fight an uphill battle, nor is it incorrect that these same social groups are often oblivious to the advantageous position they occupy. My purpose here is not to deny the existence of privilege. The idea I disagree with is that those who hold certain positions in society are blameworthy for the circumstances of others in society, and although this is not explicit in the statement of what privilege is, it is certainly implicit and it is how the concept is expressed and interpreted. People who say things like "I won't apologize for being male" are getting this end of the privilege mechanism. They are feeling guilt and blame placed on their shoulders for circumstances they themselves did not craft. Those who use privilege in commentary are often unaware that they are projecting blame.

The end result is pushback. Those who want to see a fair society are appalled at the backfire effect that calling out privilege has. The guilt and blame they have inadvertently laid upon the doorstep of the privileged in society now comes flying back at them at a million miles an hour. Some recoil in despair while others believe that the privileged classes are not only aware of their privilege, but seek to maintain it. The stereotype of the privileged, that they are unrepentant hateful human beings who don't want to see fairness prevail in society, gets reinforced. The privileged are excluded from the discussions on the way forward because they are not privy to the deprivation felt outside their bubbles of privilege.

So what ever happened to empathy? Why is the focus on placing blame and not on extending empathy? Privilege focuses people internally on negative feelings of guilt and shame while simultaneously giving victims blame as a weapon. I feel as though some of the people who think that this is a positive cause or direction for society are just frustrated and trying to express their aggression and not truly trying to affect a real change in the world out there. Empathy works by showing and not by telling. It is about understanding circumstances no matter what they are. The proponents of the fight against privilege are ironically part of a privileged class that possesses the education necessary  to understand privilege, and step on those who don't by trying to force them to take a bitter pill of shame. They themselves do not exercise the empathy that they expect their target audience to acquire through the acceptance of blame.

Promoting empathy is about creating an environment of understanding, where people understand the circumstances of others and how different they are, along with the deprivation that those others suffer. Understanding the deprivation of another human being is more important than understanding your own privilege. To some people it might sound like I am just rewording privilege, but I am not. I am advocating for the shifting of focus to the actual problems in society instead of simply pointing out how much better one group has it than everyone else. Privilege wrongly shifts the focus from the actual victims of injustice in society to who we are going to blame for it.