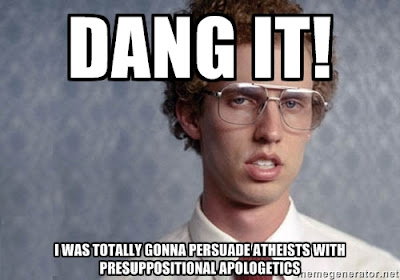 In a previous post, I made the remark that most atheists "[...] don't sit down and reason from god not existing as some sort of first principle.". It was in response to an apologist's blog post. It was a passing remark but the underlying issue runs much deeper than that.

Religions are package deals. A religion helps to place you on various issues such as politics, ethics, science and philosophy. Religions have statements of faith or dogmatic first principles to which believers must adhere to be part of that particular sect or religious movement. A simpler way to express it would be to look at those old What Would Jesus Do armbands. Everything is supposed to be reasoned from it. Biff punched me, so what would Jesus do? Religion provides first principles from which to reason about the world.

The mistake I have seen religious people often make is to conflate religion with atheism. They think that somehow the non-existence of a god is a first principle by which atheists such as myself reason. Of course the conclusion "god does not exist" would then be entirely circular. They are often guilty of this kind of circular reasoning themselves, but never mind that. Many atheists in fact become atheists through what is called an internal critique. That means that assuming the first principles of religion, does everything make sense in that framework? Given what it means to be perfect and jealous, can any being be both perfect and jealous? Given that a being is good, does commanding genocide reflect what we know as what good is?

Neither of those internal critiques require an assumption of non-existence as some believers think. It just requires an independent idea of what good means, or what perfect or jealous means. Some believers have circular definitions of those terms such as "something may be called good if god wills it", but to anyone who sees more in the concept of good such internal critiques are perfectly valid. In other words non-belief in god is the end result of certain beliefs, but certainly not the outcome of a first principle that a god does not exist.

So in the core of an atheist's typical beliefs there is no belief that god does not exist. That belief usually lies on the peripheries as a result of other beliefs. So there are many nonbelievers that come from different perspectives and reach the same conclusion. There are certain beliefs that tend to result in atheism, such as the idea that we need external evidence in order to rationally believe in something. These ideas are formed on the basis of their own arguments, but if accepted it is often hard for theism to survive. If any belief was a bacterium, then you could say that empiricism is a generally hostile environment for the theism bacterium. This is why so many people who are dedicated to the concepts of reason and physical evidence also tend to become atheists at one point.

So atheism does not have any dogmas. You are not automatically a nihilist, moral relativist, an existentialist, a postmodernist or a sceptic if you are an atheist. The reverse may be more likely, that being those things may drive atheism into being a more coherent position in your belief structure. The accusation that atheism is a first principle is not without reason. The accusation is levelled because of a unique problem that faces christians. The problem is that being both a modernist, which most western people are,  contradicts theism. Thus, holding to both beliefs creates contradictions when people think through it. One way to resolve the contradictions is to reject modernism and adopt christianity as a first principle, because if you assume as a first principle for example that the Bible is infallible, then the paleontological record won't bother you. So the accusation is levelled as a form of projection.

Since apologists rely on first principles to shield their theism, they reason that atheists must do the same to shield their atheism. But this creates the scenario in which there can be no new apostates, because there are no internal critiques that could make theists change their minds. Your first principle, be it atheism or theism, is simply an arbitrary choice, or a position based on faith, convincing some apologists to make absurd statements like "I don't have enough faith to be an atheist", because they believe that because atheism is a first principle with a set of dogmas one must accept evolution, big bang theory and other accounts of things religion claims to explain. Atheism they believe, must be like religion in giving explanations for everything religion does, and offering prescriptive rules for behaviour and thought like religion does. The reason we accept those accounts is because we are atheists, and therefore those things are aspects of the religion of atheism. This is how misunderstood atheists are to religious apologists, who in turn fuel the misunderstandings of congregations who listen to them.

This is a subtle problem, which will likely be lost on apologists who need it explained to them, because in their mind everyone is like they are and all positions on religions are religions themselves because you must have first principles and because you must have answers to the questions of the meaning of life, the universe and everything. They will say that atheism has a lot of questions to answer, because it takes faith to believe "from the goo to you in the zoo to you" or "everything coming from nothing popping". The idea that one has to accept the propositions of science in order to become an atheist is absurd, because it simply takes a rational investigation of christian beliefs in order to cause their swift death in your mind, but it is immensely profitable for apologists to keep this severe misunderstanding, because they are awarded in monetary value for perpetuating it. Their audience is not a flock of severely eye-brow raising sceptics, but people who are eager to believe the central propositions of their faith on any grounds, no matter how absurd.

It's difficult to say that all apologists have this problem, but it permeates apologetics in an extreme way such as to make any apologists that realise the problem and avoid it inconsequential in the final assessment.  The atheism as a first principle, world view or religion is a standard apologetics talking point, and by excising it from their work they would be forced to engage with serious counter-apologetics. But this strategy is not a long term success. It has shown over the years not to reverse the tide of apostasy. That is because as soon as everyday believers realise that atheism is none of those things and requires no first principle of non-belief, apologists lose their credibility and sway. Some atheists have expressed that the more they read apologetics, the less convinced they were, and I think that fundamental, repeated errors like this one contribute to that.