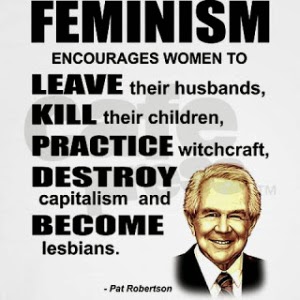 Feminism is a topic that deserves avoidance. I've made the mistake of wading into the quagmire, and now I feel the need to expose my position and hopefully I won't have to post about it again.

I think it is firstly important to say that feminism, or the promotion of the equal rights and privileges of women in society is a worthy goal. If defined as such, I think it is hard to disagree that it is, because it has the right spirit to it. Sure people can twist the meaning into something negative, but let's take a positive approach and see it this way.

I think that everyone would agree with the above term, and we shouldn't use other terms to confuse the issue (such as equal rights activism or some such thing), if only to emphasise that we all want the same thing. What people disagree on is not this goal, but rather where the problems lie, what equality and privilege means and what actions we should take to fix these kinds of problems. I think there are some serious problems in the discussion over all, so let me highlight them:

One of the largest problems with the discussions relating to feminism has been fact free arguments. People intuitively extend their own experience of being men or women to all men and all women, and their society becomes a reflection of society as a whole. There is a surprisingly small number of facts being passed back and forth and this is problematic. People will ask for facts or data, but commonly only when they are put on the defensive. If a comic book cover harms women, we need to see supporting facts. If you think that women are not uncomfortable with cat calling and most appreciate it, come along and bring some facts. One of my favourite moments in the debate is reflected in the image below.

If we plan to move beyond square one in an open forum, it might be a good idea to start with the facts. Maybe there are higher quality discussions where facts feature prominently, but if so I have managed to miss them entirely in this topic.

No discussion is in a good state when you can predict the behaviour of both sides. Most of all, this is the least interesting kind of discussion. This is even true when there are some thoughtful people involved. Getting through the reactionary noise to actual substantive stuff is difficult. I initially took this lack of substance as a total failure of feminism to produce anything of substance, but I have been shown to be wrong by some good content that highlights the plight of women in society.

Nobody Seems To Know What They Want

If a particular social movement is having allergic reactions to T shirts on the one hand and trying to campaign against harassment on the other it becomes hard to know what the hell is going on. Feminists who blow the small issues out of proportion sabotage their own causes by not choosing their battles. As an example, if adverts for fishing equipment primarily target men, and the market grows in such a way that most fishermen are women, you will see the adverts change to represent the dominant market. Advertisers are not ideological in any sense except a capitalistic one. By fighting the wrong battles precious time is wasted, and a fight to change the status quo by force of changing symptomatic behaviour presented by following it is almost completely futile. There needs to be a realisation that changing some things will cause other things to follow as effects.

Labels as a means of subduing an opponent doesn't work very well. If  the #MRAbrigade and #feminazis would just realise this, the world would be a better place. In this entire discussion labels come up again and again, and the unfortunate thing to me is that clever people who know better love to indulge too. The label and dismiss pattern of discourse is so common in this issue that even pointing it out seems banal. It's important to try and understand what people hold to and reasoning it out with them. *As a beta feminist mra rape apologist, I should know this all too well.

There is so much evidence that feminism is evil, that it is difficult to doubt that patriarchy is the one and only real problem in society. I have thus constructed a sentence that both sides of this discussion could agree with. All you need to do is read fast enough, and ignore moderation in attitude when evaluating it. Patriarchy is everywhere from cereal boxes to video games, and every known instance of feminism is seen as deplorable. If you look for problems everywhere, you will find them everywhere. The challenge to developing a nuanced and hopefully more accurate view of the world is to put the anger monkeys back in their cage and try to search for the good in what others say. Although there will still be assholes, I think you will find that there are more well meaning people than you think, sometimes misguided, or sometimes trying to show you that you are in fact misguided.

I have to say in conclusion that if Pat Robertson has a problem with feminism, there must be something positive in it. With all the screaming, fist shaking coupled with the problems above however, I choose to avoid it.


* At some point or another, I have been called each one of those names.
thoughts