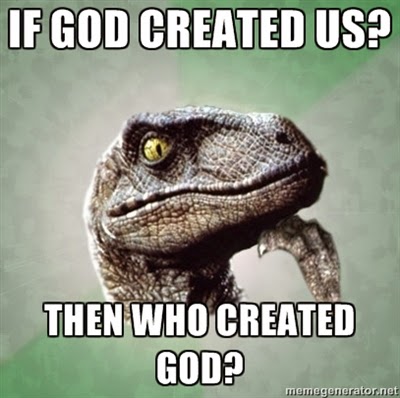 This is a fairly common argument and it comes from the theist quip "if god doesn't exist who created us?". When pointed at atheists the question is loaded, because it presupposes a who if that is not a fact that is agreed on, but is it valid to ask this question of Christians?

ChristianAnswers gives the following answer to the question:

The important thing to note here is the definition bit. God is defined as being uncaused, and the Bible asserts this much. The argument then takes a new turn, where the question becomes:

"Well, if you can say that god is uncaused, why can't I just say that the universe is uncaused?"

The bit about god being uncaused is pretty much a bare assertion, and there is no evidence or argument to support the assertion that god is uncaused. Therefore an assertion of an infinite universe seems to have at least an equal amount of support to it than an infinite god.

There are other problems too. How does god know that he does not have a god? The standard answer is that he is omniscient. Okay, but how does god know that it is omniscient? Isn't it logically impossible to know that you are omniscient, and since god can only do that which is logically possible, doesn't that entail a contradiction? Doesn't Descarte's malevolent spirit present the same problems to god that it does to us? If god cannot know that he has not been created then the Bible cannot claim that god is uncaused.

If theists respond with ignorance for instance by saying that we don't know how god solves these problems but he does, doesn't that cast a bright light of doubt on the assertions in the first place? How can you assert something if you don't know if it is logically possible to know it in the first place, or in fact if it is seemingly logically impossible? verdict?

Once again we are kicking the can down the road. Although the first question can appear to be a strawman it is worth pursuing, because deeper problems emerge with the justifications of the assertion of an infinite god. We don't simply get to define things and then people just accept the definition as a true reflection of reality.

There is a video that opens the can of worms with an interesting story. Enjoy!

WHY ONLY SOMEWHAT VALID?

The question by itself does not count as an objection. If it is all you've got, then you are up shit creek without a paddle.