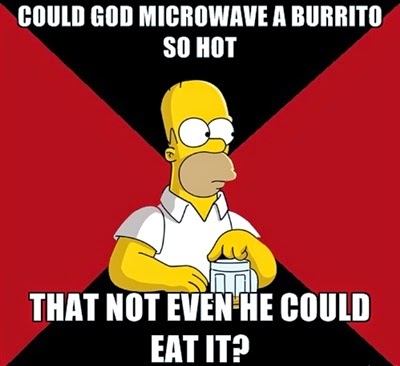 The omnipotence paradox is probably one of the more well known arguments against the logical possibility of god. Homer summed it up pretty well. If a being is all powerful, that being would be able to perform action x, which would prevent any action y, but if a being is omnipotent it cannot be prevented from performing any action.

William Lane Craig has an explanation of why he thinks this is a bad argument:


The response is basically this, in case you don't like watching videos with poor sound and no actual video stream. :)

1. Theologians understand omnipotence as having the ability to do anything that is logically possible.
2. Having the ability to do things that are logically impossible is a malformed concept. It is nonsense.
3. IF god could do the logically impossible, he could in fact eat a burrito that he made too hot to eat. This entails a logical contradiction, but given this answer god is an entity over and above logic.

So let's explore this a little:

1. Maybe the term omnipotence is a problem. Maybe theologians should use a term like maxipotence, denoting maximum power. In Matthew 19:26 Jesus supposedly said:

'26 Jesus looked at them and said, “With man this is impossible, but with God all things are possible.”' NIV

So which is it?  Does the apologist's definition of all also change based on this verse to all things that are logically possible? Regardless of what they say, most everyday christians and seemingly Jesus (too bad Jesus didn't study under Craig) are mistaken. Was Jesus just exaggerating?

2. As far as we know this is true, but there is no basis for stating that logic is universal, even to the degree that god must be subjected to it. To make such a claim is to create a god that is not functional in the absense of logic, which then seems to be some sort of concept that restricts god. Logic in this view is some sort of unbreakable natural law that not even god himself can violate. This means that god could not have been the author of logic to begin with, because that would entail an illogical state of affairs that is impossible according to theologians like Craig.

3. There is a deep problem with this answer. It is a clever avoidance of the problem, but it has dire outcomes for theology. If god is an illogical entity then god is not knowable to human beings, and theology is a failed enterprise. It can solve so many problems in theology that god itself becomes a nonsensical concept that one must just believe in. Fans of apologetics would not find themselves comfortable here because defending the illogical is logically impossible, since no logical justifications could suffice. This kind of non-cognitivist theology is not philosophically defensible. It is a laughing stock. The fact that Craig mentions it to sound clever is telling. It seems that anything that could make an apologist seem good, even something absurd, is acceptable.

So what's the verdict of the burrito paradox?

VALID
Why?
The solutions to the omnipotence paradox as presented by apologists just effectively kicks the can down the road. It doesn't solve the problem, it just opens up a fresh new batch of problems because each explanation entails a sacrifice on the concept of god. The answers are clever and manage to make it look like there is some sort of good answer, but just beneath the surface a myriad of problems lurk. Maybe these problems are not intractable for apologists, but they warrant further discussion and certainly not quick dismissals like the one issued by Craig above.